•Collectivization - all peasants were to work on collective farms
•Called Kolkhoz, all land was pooled together
•Party officials monitored their output
•By 1932 62% of all peasants collectivized
•Kulaks wealthier peasants who owned their own farms
•They were killed or sent to Gulags in Siberia
•Seen as a threat to collectivization due to their free enterprise ideals 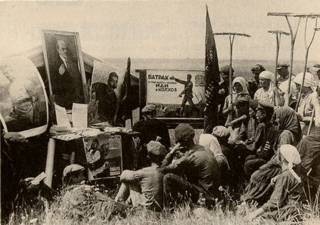 “Ideas are more powerful than guns. We would not let our enemies have guns, why should we let them have ideas.” Stalin

View Collectivization in the Soviet Union and over 3,000,000 other topics on Qwiki.