•40th U.S. President
•A former Hollywood actor
•Elected for a second term in 1984
•Saw the USSR as the ‘evil empire’ and wouldn’t negotiate with them for the first years of his Presidency
•Was much more hardline than the détente Presidents
Increased military spending dramatically as part of the renewed arms race with the USSR

Reaganomics
1980’s Arm Race
•The USSR had a 3:2 advantage in sheer numbers
•New issue is how to deliver them
•Cruise missiles are placed in Europe by NATO
‘Smart Weapons’ - planes, weapons and even tanks begin to be controlled by computer and are ‘guided’ 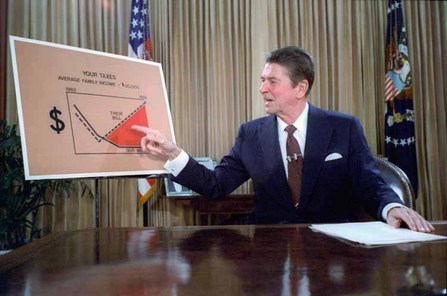 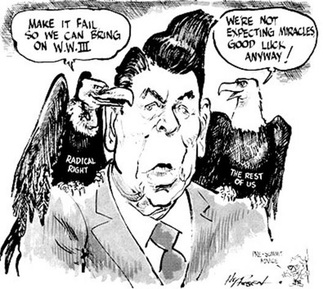 Summary: Ronald Reagan was the president who came up with the idea to both create and research impossible weapons to make. This was to convince the Soviets that they were making progress regarding their technology advances. The Soviets response, who were already struggling with a poor economy, spent more of there money and go into massive debt so they could appear as if they were making advances too. This backfired greatly on the soviets but the plan was successful for Reagan because the USA came out stronger.