•Aug. 1990 Iraq invades Kuwait
•“No more Munichs” proclaimed by George Bush Sr. and place sanctions on Iraq to pull out
•30 countries join in a coalition against Iraq (including some Arab countries)
•USA made sure Israel wouldn’t join for fear of losing the Arab support
•Kuwait liberated after 4 days (90,000 Iraqi casualties)
•Bush did not invade Iraq or remove Saddam in fear of losing the Arab support
•Threat of poison and gas high
Saddam tried to get Israelis involved by firing SCUD missiles at them
Click Here For Gulf War Game 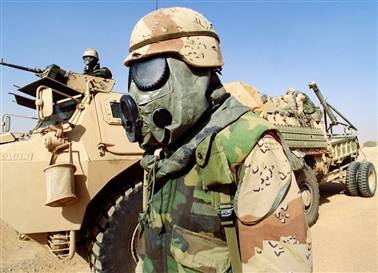 Question: What would of been the reaction if Bush had removed Saddam?
Summary: Iraq invades Kuwait in 1990. George Bush Sr and the UN places sanctions on Iraq to pull out. 30 countries join a coalition against Iraq. USA made Israel didn't join coalition in fear of losing Arab support therefore Kuwait liberated after 4 days which resulted in 90 000 casualties. Bush did not remove Saddam or invade Iraq as he wanted to keep Arab support. SCUD missiles were fired by Saddam to get Israelis involved.