Détente
•Reasons why U.S. sought détente:
•Nuclear and Strategic Parity - The Russians had caught the U.S. in most military areas (caused them to want to think of other options)
•Early Success:
•Nuclear Non-Proliferation Treaty (limit the spread of Nuclear weapons) Signed by Johnson in 1968 (France and China do not sign it)
Many, like Henry Kissinger, felt détente was just a new form of containment

Who signed on the Nuclear Proliferation Treaty? 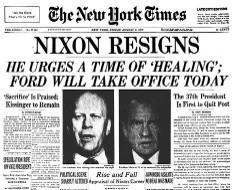 Summary: The 37th American President was Richard Nixon. This was the man who began Vietnamization and the policy of Dente. Although the Watergate Scandal was the triggering factor in his resign, detente went on. Examples of detente are the Nuclear Strategic parity and The Nuclear Non-Proliferation Treaty.