The Israeli War of Independence, 1948

•Background to the war:
•Holocaust and persecution of Jews in Europe leads to many of them leaving to Israel
•Arab League is formed in 1945 to protest the Balfour Declaration
•France gives Syria and Lebanon independence in 1946
•British fall out of favour with the Jews under the guidance of the Zionist movement (A homeland had not been created yet)
The Brits hand the problem over to the UN in 1947
•1947 the UN suggests a partition.
•Jews are happy with this the Arabs are angry
•Arab radicals had attacked Jews throughout 1947
•The Arab League had rumours of attacking the Jews once the Brits left.
•The day the mandate ends the Jews under David Ben-Gurion attack the Arab League countries
•The Jews win and increase their territory from the partition including the Negev
Desert
•Many Palestinians became refugees
Palestinians begin terrorist attacks within Israel 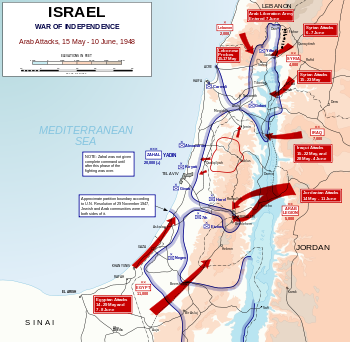 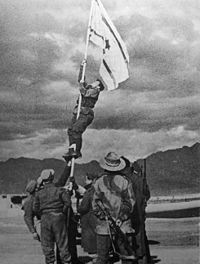 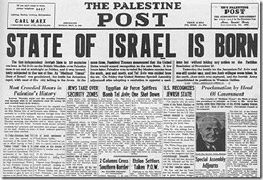 Question: Was there any other solutions that the UN came up with other than a partition?
Summary: Due to the holocaust, jews left Europe to go to Israel. The Arab league was formed to protest the Balfour Declaration. The jews began a Zionist movement to get their homeland. The Brits handed the problem over to the UN in 1947- the resolution was a partition. The Jews had their own country (Israel) but the Arabs are angry because Israel split up many Arab regions. The Jews won and forced Arabs to retreat, and Israel increased its territory. Which resulted in both Jews and Palestinians beginning major conflict which continues for almost 50 years after.